I was a serious rock climber for 6 years, and I’ve been training with barbels for almost 8 years, and I finally have my first real shoulder injury. This is the first in a multi-part series on what’s injured, how the injury occured, and how I’m going to treat myself.

My left shoulder has three basic movement issues right now. First, I sprained my acromioclavicular (AC) joint by receiving a lot of thrusters onto my shoulders with my elbows down, rather than up in the front rack.

Second, when I lower the barbell to my shoulders, the left shoulder comes up and forward off the rib basket*. This is not supposed to happen, and irritates the heck out of my biceps tendon. If you’re having pain with your biceps tendon, it’s because your shoulder is moving in this same way during some movement.

Third, I’m now missing inferior glide of the humerus during abduction. This pins and irritates the supraspinatus tendon between the humerus and the acromion process of the scapula.

The shoulder, it would seem, is like a gyroscope. It starts mostly stable, but one perturbation sends it wobbling all over the room.

Now that we’ve established the issues I’m dealing with, let’s see if we can figure out how they happened.

HOW DID THIS HAPPEN?

The AC sprain**, as I mentioned, is the result of receiving the barbell onto my shoulders with my elbows down, rather than in the front rack. Flexing the shoulder into the rack position produces a stable shelf on which to support the barbell. The contraction of the trapezius and  deltoid supports the AC joint by creating  a high tension  load in every possible direction. This is the same principle that makes bicycle wheels work. 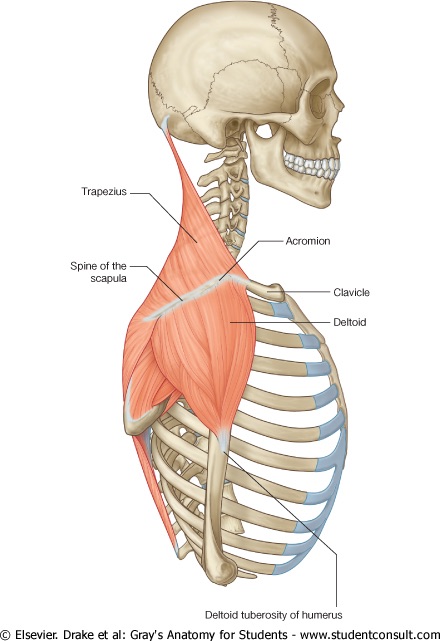 By receiving the bar with my elbows down, the protective tension is reduced, and the joint experiences a significant, unbalanced load. Specifically, the scapula gets dragged inferiorly while the clavicle stays still. This creates a large, vertical shear stress at the AC joint. Such a load is not one of the joint actions for the AC joint, so it’s no wonder it complained.

The biceps tendon issue is clearly one of scapular instability, i.e. , I’m losing control of the scapula as the bar comes down. I’m not sure why I’ve developed this particular problem, but it’s there nonetheless. 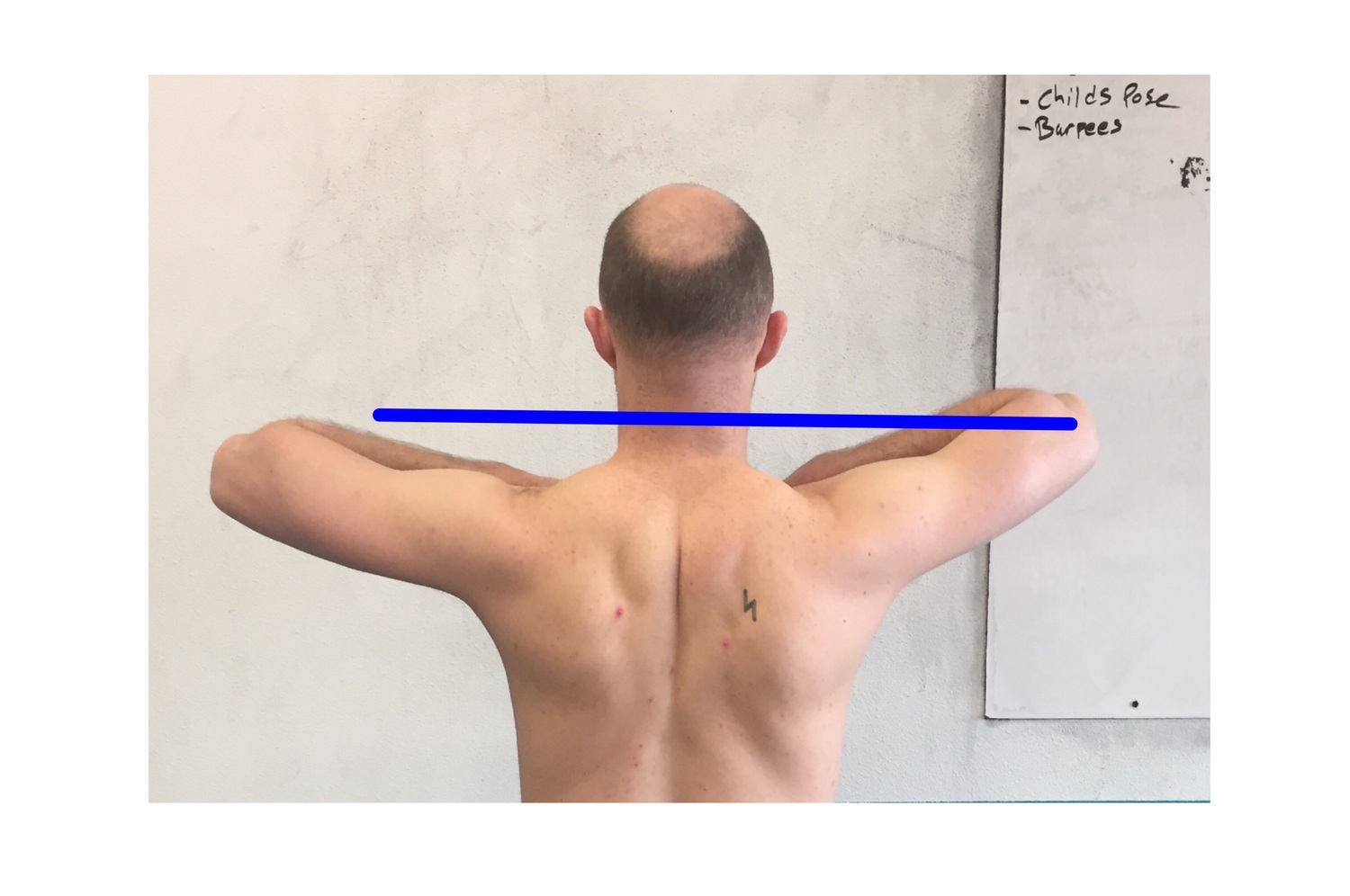 This is the moment when the left deltoid begins to dominate the movement.

Finally, the missing glennohumeral joint movement is a rotator cuff strength and activation problem. Rotator cuff action should be reflexive, but it is often overwhelmed by the activity of the deltoid. When this happens, the humerus tends to run into things, like the scapula or the biceps tendon, and causes inflammation and pain.

WHAT AM I GOING TO DO ABOUT ALL THIS?

The first thing I’ve done is to remove all pressing and overhead movements from my training. When you have an inflammatory or irritation injury, like tendonitis or IT band syndrome, the injury can’t get better until you remove the source of irritation.

I’m a little frustrated by this. CrossFit Big Dane is in the midst of a Olympic weightlifting cycle, so it means I can’t do the jerk and push press work. I also set a 5 second freestanding handstand as my skill goal for April, so that’s out. Also unavailable are push-ups, burpees, pull-ups, back squats, and hanging from rings or a bar. Yuck.

Second, I’ve ordered a Solo package from Crossover Symmetry. This is a system of exercises to be performed with specialized resistance bands. The system warms up the shoulder and rotator cuff and develops scapular stability. This should help me with both the rotator cuff and biceps tendon issues. 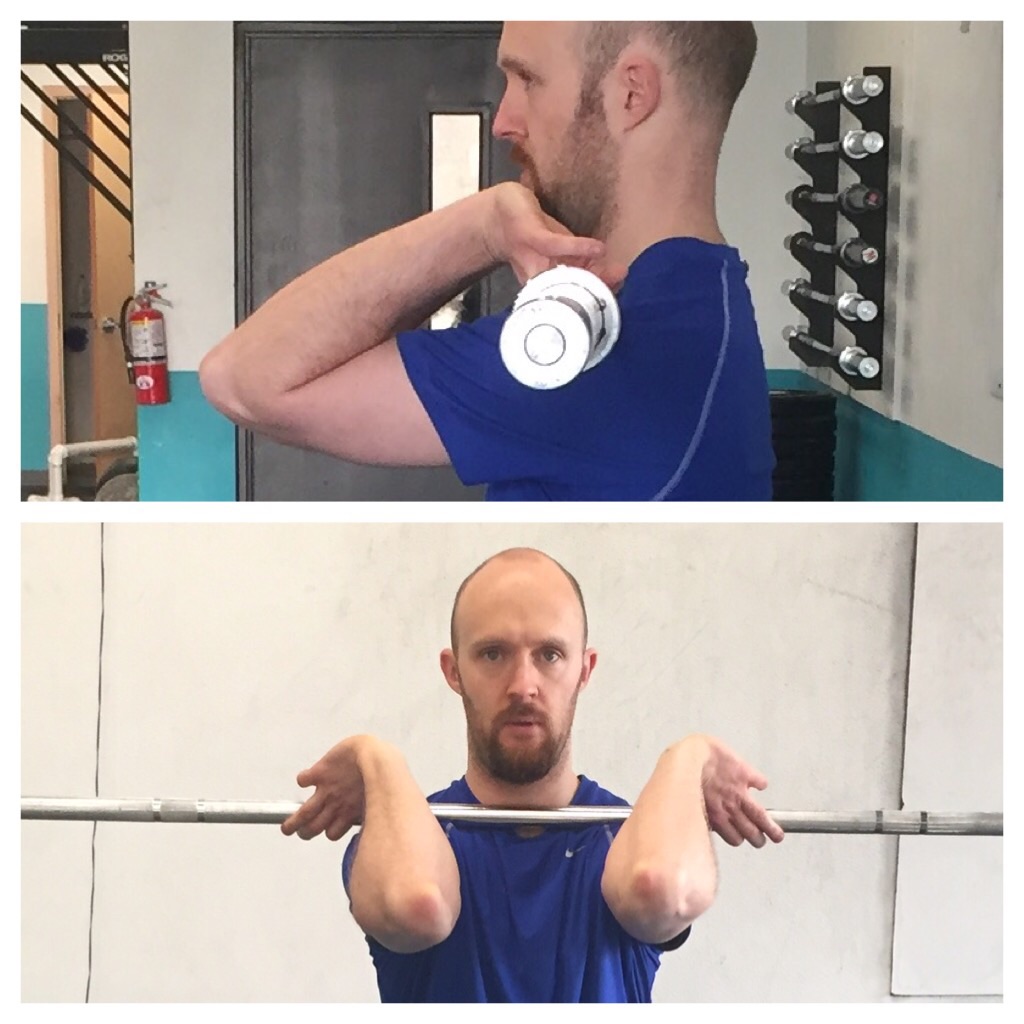 Third, I’m going to be working hard to improve my front rack position. I can get my elbows most high enough, but I need a lot of work with both horizontal abduction and external rotation.  When I do return to pressing work, I’m going to slow way down to ensure I’m either lowering the bar under control, or receiving the bar in the front rack. 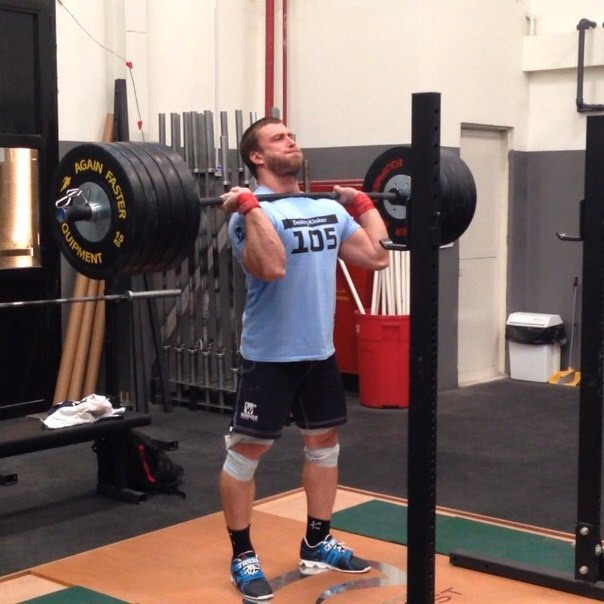 Klokov is a beast. That’s about 400 lbs on the bar. His rack position is better than mine.

Shoulder injuries are as universal as back pain, especially among CrossFitters. They can be difficult to resolve, but I’m hoping this series will show you that they are rational in origin, and thus rational in treatment.

* I like to call it the rib basket, rather than the rib cage. A cage assumes little to no movement, but the ribs move a lot. They move in a bucket handle-style motion for breathing, twist to allow thoracic rotation, and fan open a closed to allow lateral flexion.

**Sprain and strain are often used interchangeably, but in fact refer to injury to specific types of tissue. A sprain is a tearing of purely connective tissue, e.g., ligaments or joint capsules. A strain is a tearing of muscle or tendon. Technically strains can occur purely in either tendon or muscle belly, but they most often occur at the musculotendinous juncture because it is the weakest area of the muscle-tendon system.